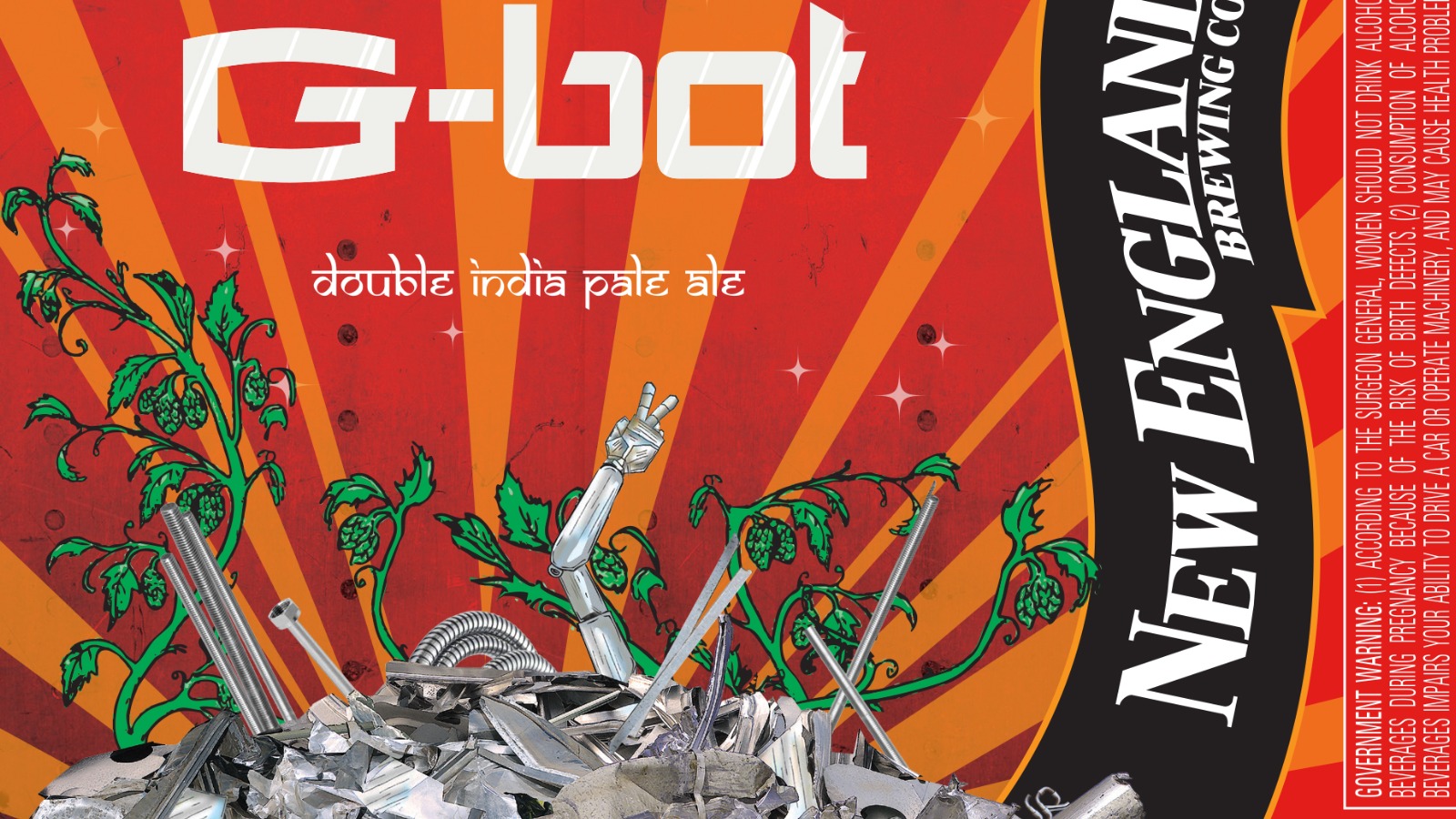 The Incredible Story of G-Bot 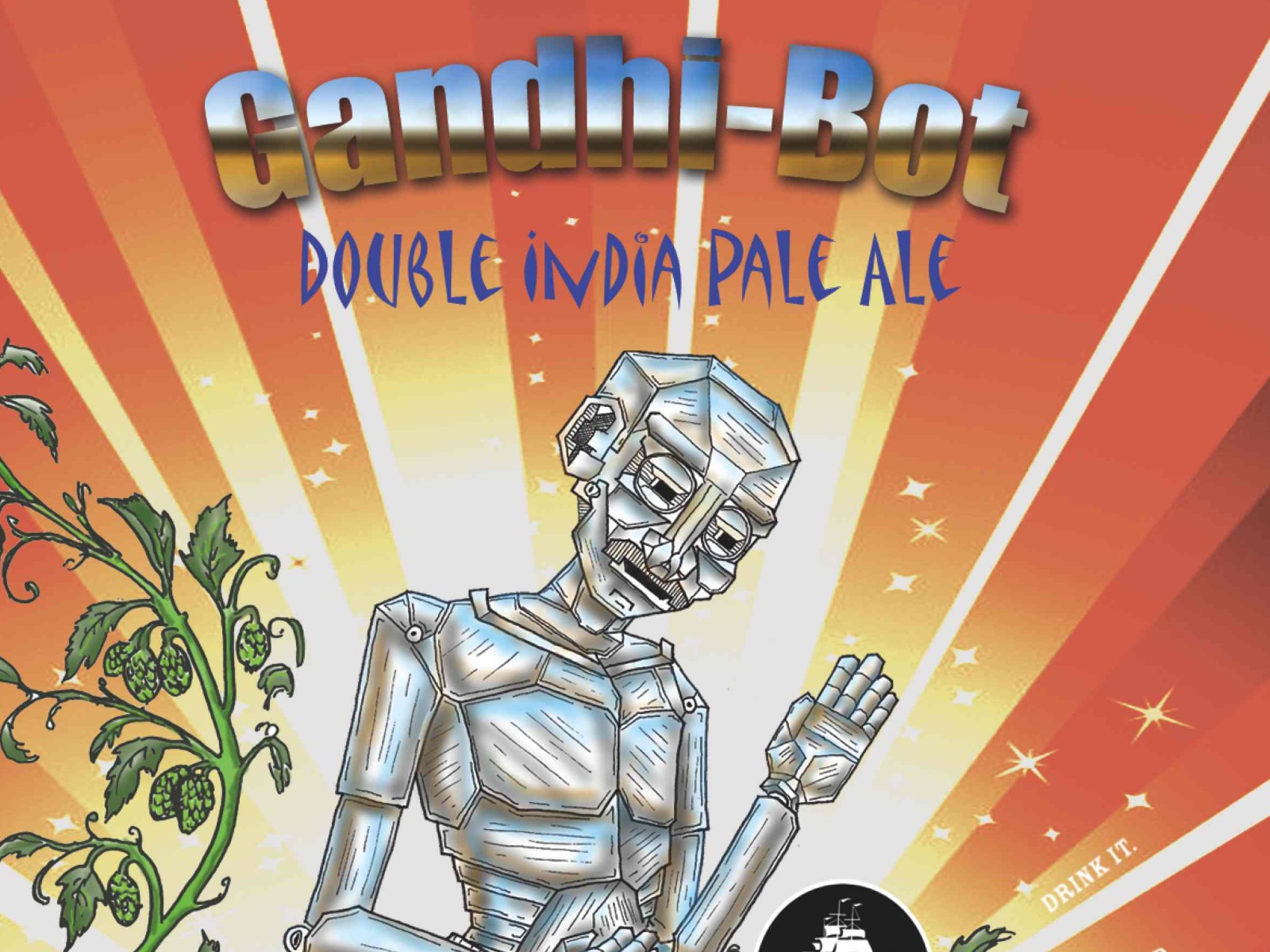 So, in honor of a big, ole shipment of G-Bot DIPA cans hitting shelves out in the real world, the label story of the day is all about Gandhi Bot and the can art, hopefully answering questions and dispelling myths.

This one’s a bit long. Grab a snack and a beer and settle in as we dig up this old chestnut.

A million lifetimes ago, back when NEBCo. was trying establish itself in the small brewery game, there came a moment when a Double IPA seemed an appropriate addition to our growing roster of beers. But there needed to be a name and an image for this new beer.

Pardon me while I interrupt myself. Memory is a funny thing. It’s fleeting and ether-ous. We may recall very specific instances or details from our lives. But we can’t remember where we put our car keys….while we stand there holding our car keys. As Rob and I remember the origin of the name slightly differently but neither memory completely out of the question, I offer both for your perusal. We now return you to our regularly scheduled blather.

Now when coming up with a name for a new beer, a practice that still happens today is that I’ll come up with a whole bunch of names and then let everyone else whittle the list down to the name that is chosen. From the original list of who-knows-how-many tags, about 10 names remained as the “final list”. Management and brew squad then asked that if I were to name this beer, which name would I choose.

A quiet stillness circled us all for a few beats as they were registering how quickly the name came out.

“Um…okay,” they finally said. “What the hell’s a Gandhi-Bot?”

Simple. It’s Gandhi as a robot. As an India Pale Ale, the immediate reference point and geographic tie-in is well-known cool guy and Father of the Country, Mahatma Gandhi. And as the beer was in a metal can, a slight tie-in is made with robots being metal. Add in the “Universal Law of Robotic Coolness” and….well, you get Gandhi-Bot. 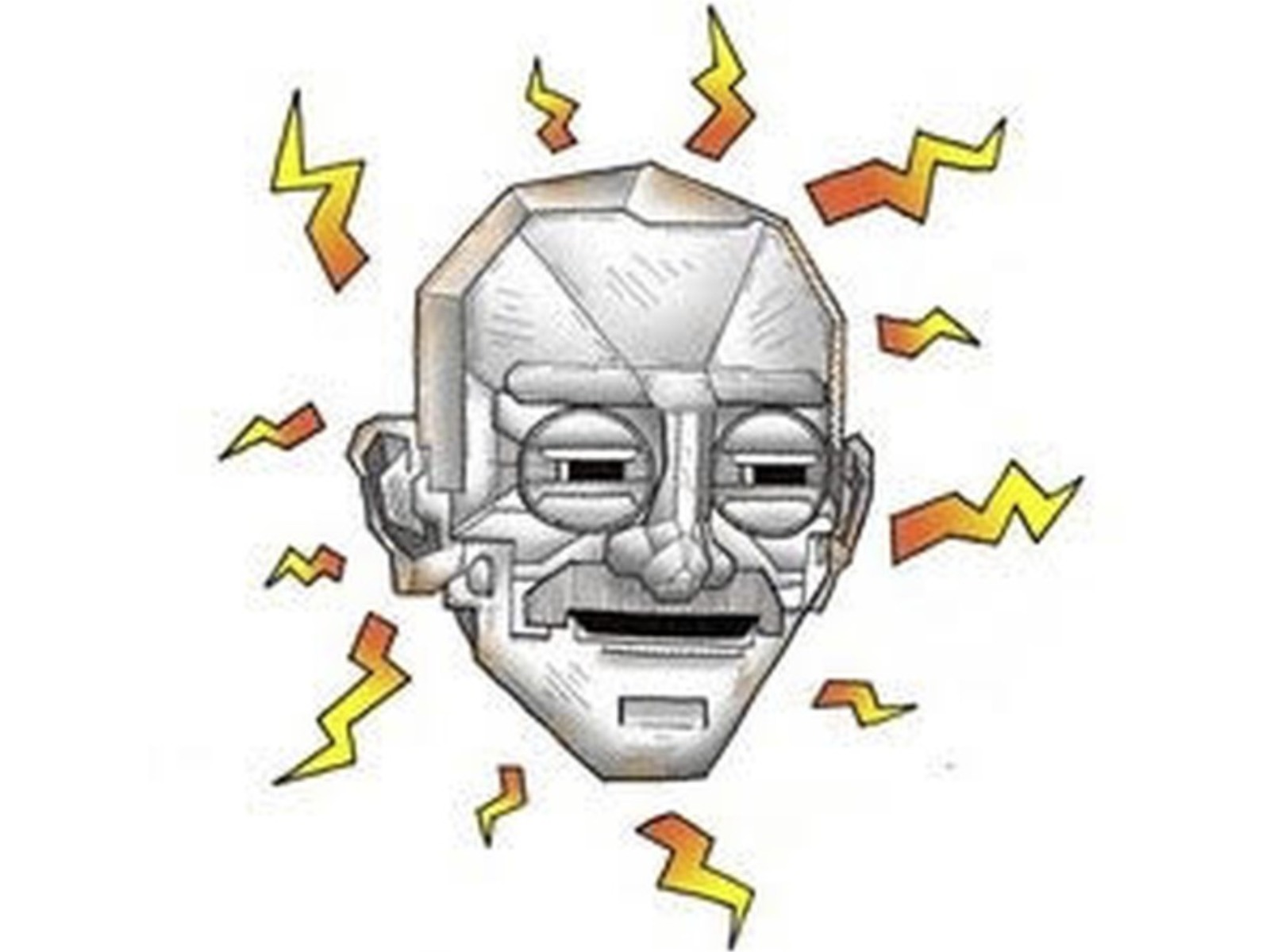 The silence stayed for a while as I was met with blank stares.

The Law of Robotic Coolness and It’s Involvement in The Name.

In my world there are “Universal Laws”; decrees that govern and influence much of what we do and what happens all around us (think along the lines of Murphy’s Law or The Law of Perpetual Transmutation of Energy but not as formulated and shouted by that freak in the back of the classroom.).

One of these laws states: “Any object or person that gets remolded and reshaped into a robot form becomes cooler in people’s eyes.” It just happens, all right ? I don’t know why, it just does.

So, what if you took someone who was already cool (like Gandhi), made them a robot (a Gandhi-Bot, if you will), applied this law…and…..you end up with something that was pretty damn cool. AND what if that cool robot in question was actually doing the dance “The Robot”? Well then, you’d have something so special, something so universally cool, it would have to adorn a beer can. This Law helped solidify the existence of the beer.

The new Double IPA from New England Brewing was to be called “Gandhi-Bot”.

I set out to nail the image and do something fun and different for my first ever beer label. And it was pretty simple and it drew itself. Immediately I had what I thought was a solid rough sketch; an angular representation of a metal-plated Mahatma Gandhi, wearing a robe, sporting his trademark glasses and moustache, and getting down on the dance floor with his arms jutting out, doing an unenthusiastic version of “The Robot”.

I inked-in a copy of the Bot and handed it to Rob.

The colorized image of Gandhi Bot was enhanced and printed on stickers. Those stickers were then painstakingly hand-wrapped around 16-ounce cans and then prayed over in hopes that anyone would buy them.

I also threw down a separate drawing of Gandhi Bot’s head with a couple mini lightning bolts surrounding it. I figured if the dancing version of “G” didn’t fly, maybe this solo drawing could be used.

The G-Bot head ended up on t-shirts and snifters and tattooed on the calf of someone in New York. And yeah, that picture made me cry. There are also whisperings that the first Gandhi-Bot shirts, with no identifying brewery mentions other than the image, became a kind of underground “secret handshake of beer geeks”; one of those “if you know, you know” things.

Now jump forward about five years or so. Gandhi Bot DIPA had gone through a few changes. The ABV was lowered to its current level. Those annoying-as-hell, hand-labeled, 16 oz. cans were dropped in favor of printed-on, 12 oz. cans. And public knowledge and approval had grown quite a bit. Four-packs of the stuff were being hoarded by liquor stores and sold to a select few customers who specifically asked for it. Brewing enough to meet the demand was getting difficult. And as our hop shipment for the entire year comes in one, bulk shipment, there were only enough hops to brew 4-5 batches in the first year of the beers existence (and only 12 batches for year two). This put a finite limit on the amount that could be brewed of a beer that was growing exponentially. The Bot was getting quite a bit of all-over attention.

One morning the NEBCo. Facebook page showed that instead of the usual 5 or 6 comments accumulated over the passing evening, there were multiple hundreds of comments. The comments ran the spectrum of rage, ranging from short bursts of irritation to veiled threats of violence. And all of the posts were aimed at the Double IPA mascot, Gandhi Bot.

Um, whoa. This was some unwanted attention. 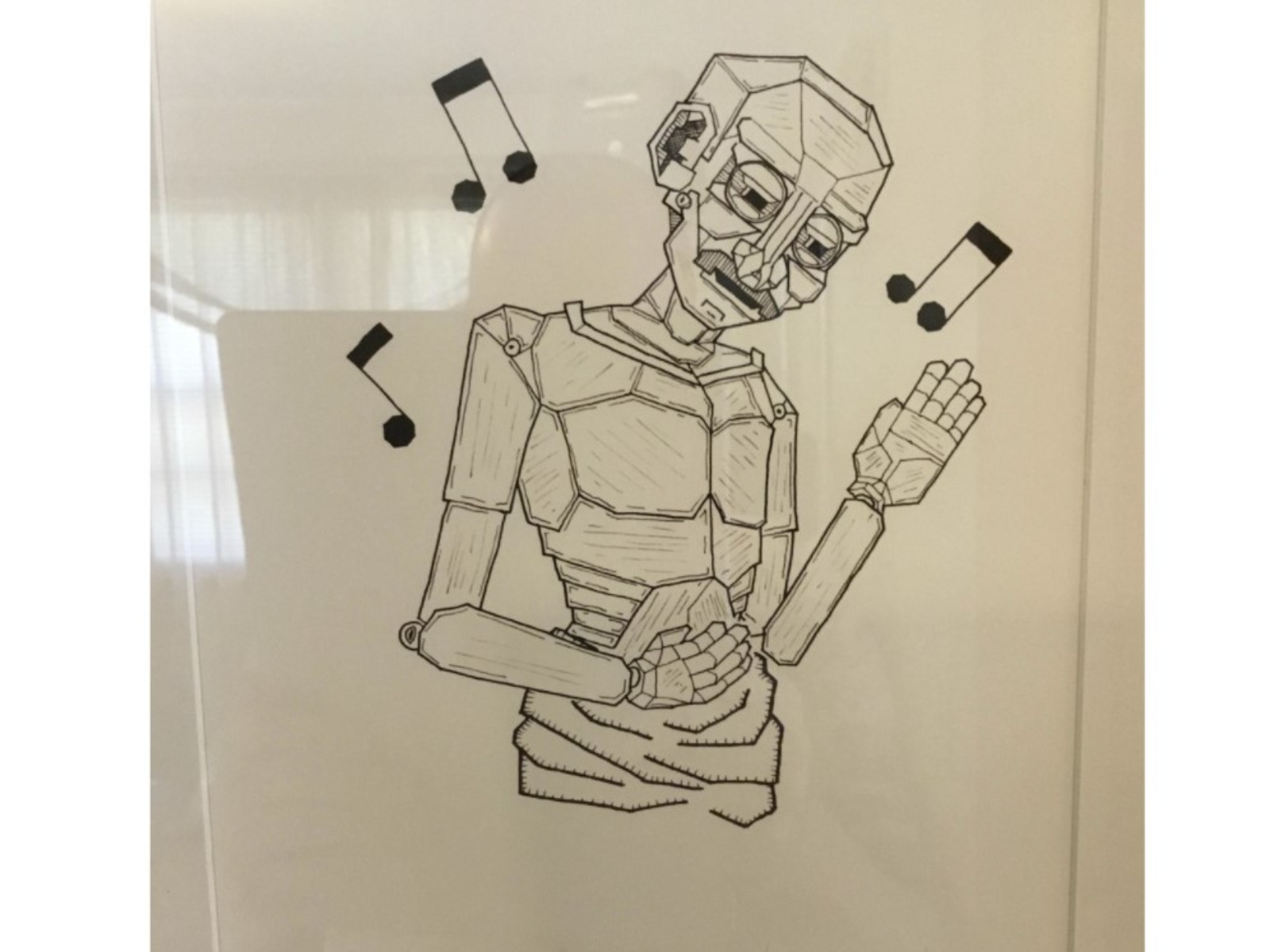 I scrolled through the comments and the consensus was that the image on the can was insulting to Gandhi, his family, and every Indian citizen across the globe. Mahatma Gandhi preached temperance. Reading the posts, to have his image on a can of beer was a huge slap in the face and grotesque.

I started digging around the ‘net and found YouTube videos, online news articles, and lots of images of the can. And nearly all of it was unhappy.

The origin of the attention, I found, was a poorly-researched news article (NEBCo. is not a British brewery with hundreds of employees). That piece was then copied and pasted across the ‘net.

And the negative attention grew. Soon local TV stations and on-line and actual newspapers were circling the parking lot looking for pics and video footage. BBC World picked up the story.

Now, before all this happened, I personally spoke with a young woman visiting the NEBCo. tasting room. She was a close friend of a relative of Mahatma Gandhi and recently attended his wedding. She was a fan of the beer and showed the younger Gandhi dude a pic of the can. She told me that he, an actual family member, thought the label was fantastic.

So, when a statement had to be made to the press, it was mentioned that indirectly, we heard the Gandhi family didn’t have a problem with the image. What we didn’t hear was that there are many branches coming off the Gandhi tree. And the branch that had the most political clout and money was not thrilled and had full intent to pursue legal matters. Things were not looking too savory.

And in the midst of this, there was the slaughter of the staff at French magazine Charlie Hebdo by religious extremists over a cartoon that they published. Yeah. You can see the mess that was being fueled and swirling around us.

The problem had to be dealt with. There was no way to avoid it and no reason to. There was a meeting with local Indian business owners and some cool-as-hell talks as to what we can do went down. And the brewery decided the image should be altered. The remaining cans weren’t going to be destroyed because they were pure income/pure profit; a point that the local business owners agreed with . NEBCo. decided to sell the last cases of Gandhi Bot out of the brewery and modify the can and the name just a little so a bit of ease could spread to everyone.

An outside firm drew up the current image and the name was altered to “G-Bot” as that was what so many people called it anyway. That’s it.

Okay. Finality. No. The recipe was not changed because of this incident. Yes. I have the original pencil drawing of Gandhi-Bot. No. We did not change the name and image to kowtow to ‘PC rhetoric’. No. The Charlie Hebdo tragedy and this are not comparable. Yes. We met Indian customers who didn’t give a toss about it. Yes. We’re pleased and happy with the overall outcome. No. We didn’t infrequently brew the beer to create a buzz about it. No. We are not putting G-Bot in 16-ounce cans or using the old can label. Or maybe we are. I don’t know. I can’t remember. Memories are fleeting and etherous.

Taproom / Artguy / Keeper of the Scroll